Are you along for the ride?
I had the pleasure of working on this project for Amazon Prime as a freelance gig with Curator Pictures. My job was to draw up cartoon eyes & arms and have them track onto the Amazon Prime boxes as they travel through the packaging and distribution center.
My Roles
Design of the character eyes and arms
Animation of the character eyes and arms
3D Camera Tracking of all shots
Rotoscoping
Compositing
Credits
Art Director
Clayton Taylor
Producer
Matt Ralston
My process
Styleframe Design
I created the below styleframes for the client to see how the faces might look once composited onto the boxes. The client had some changes on these initial looks and we ended up going with a more simplified cartoon, hand drawn feel for the eyes. 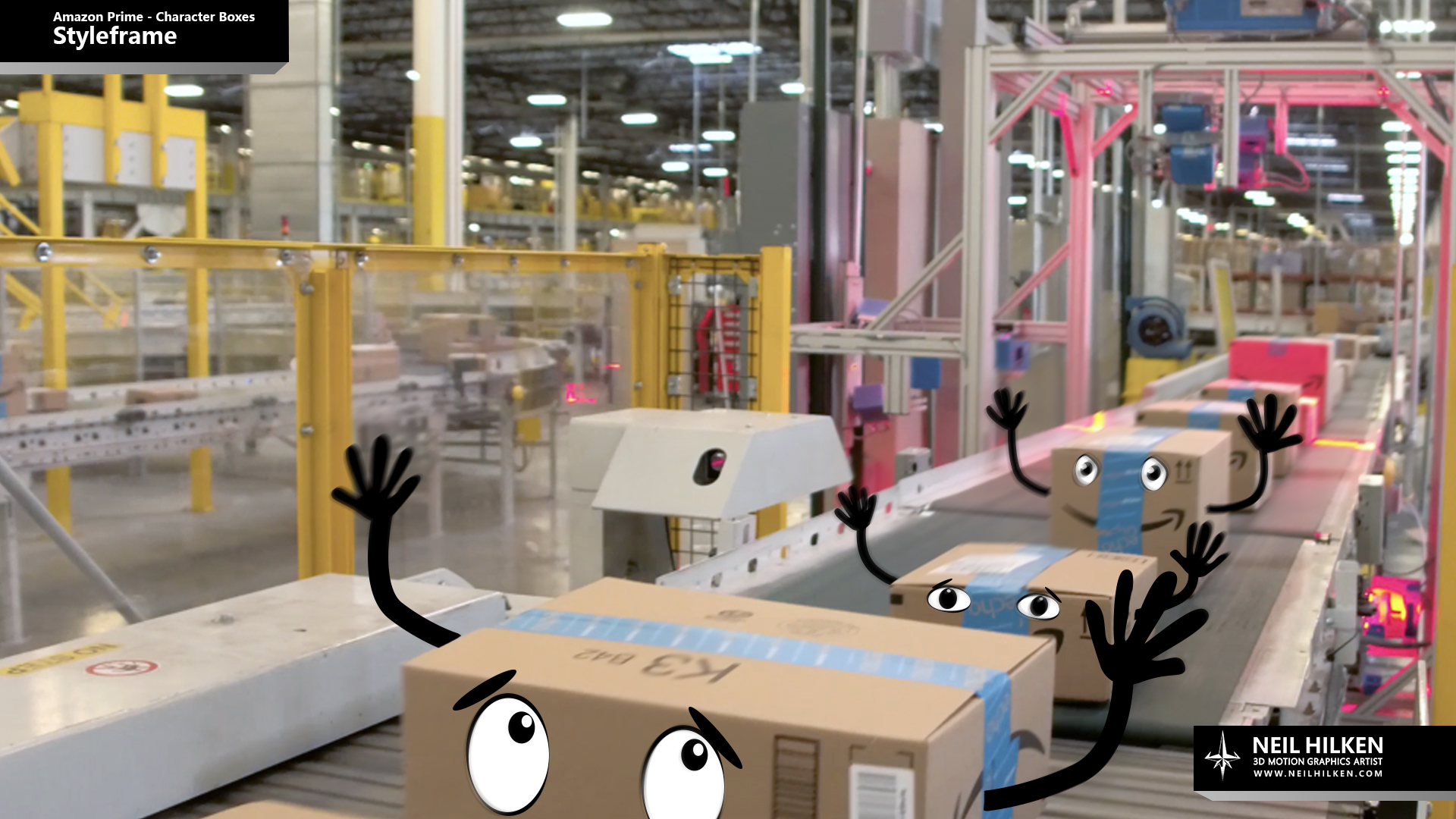 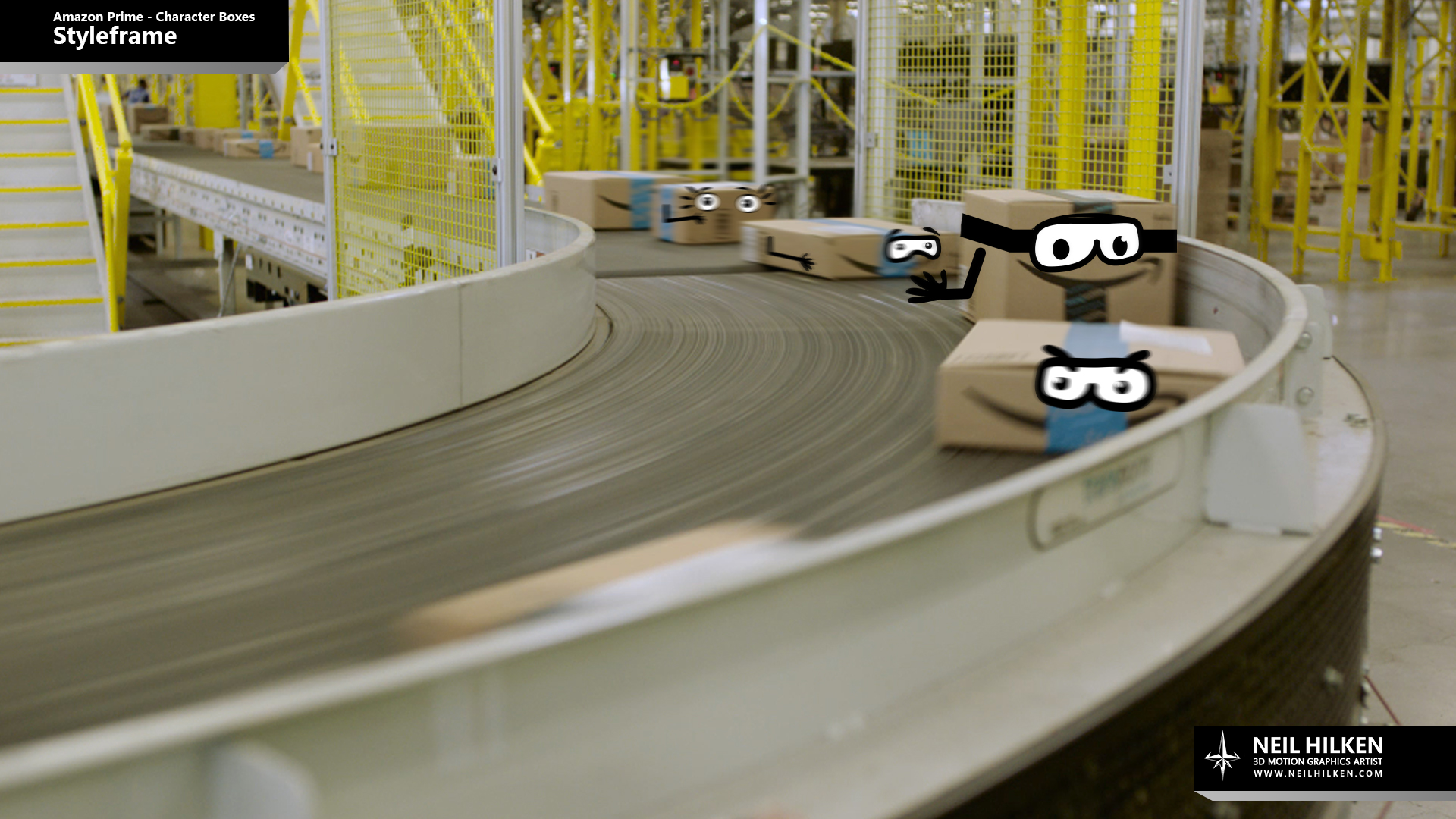 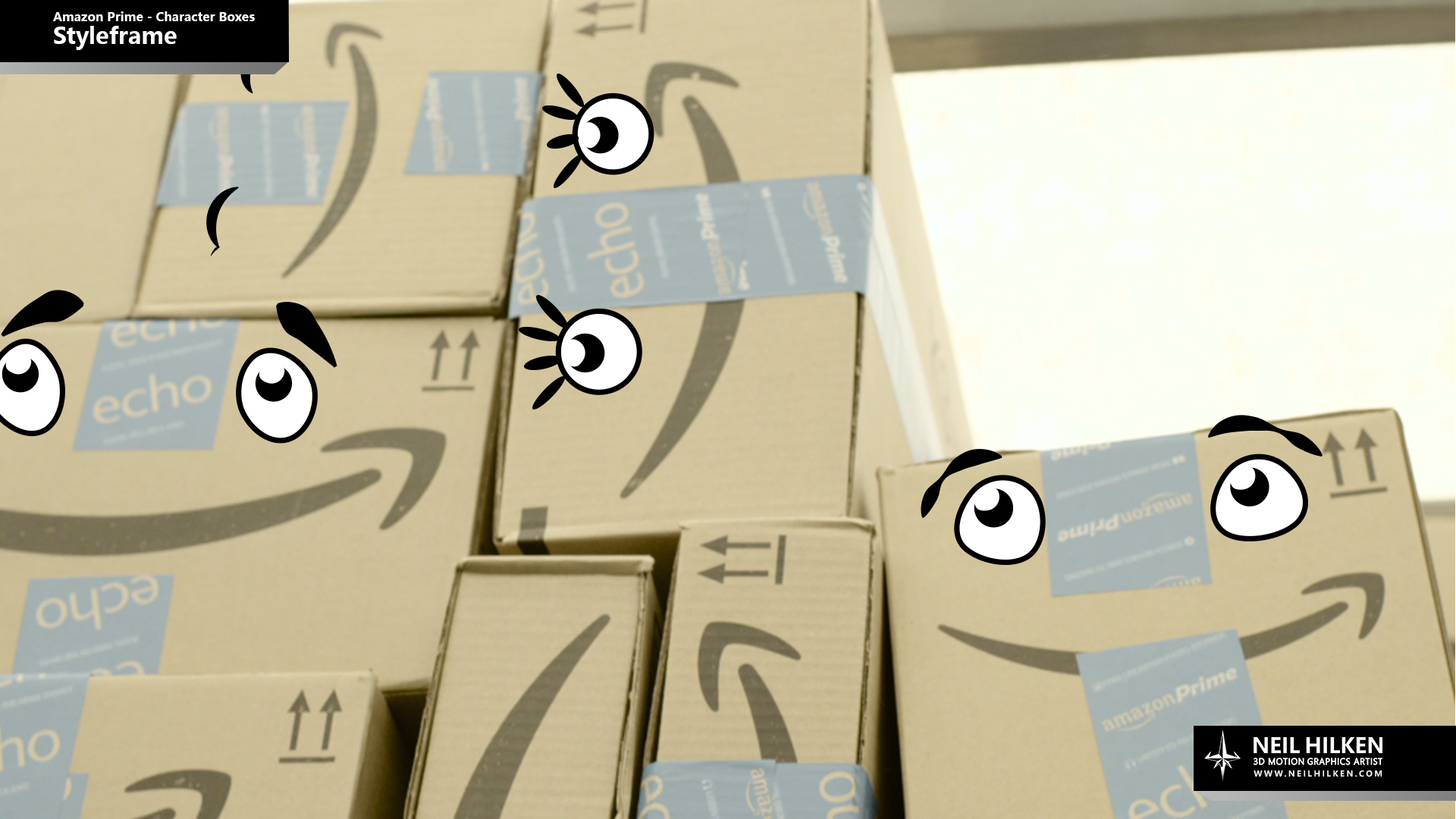 Painting the Character Faces
To achieve a more hand-drawn look of the character faces, I used the Paint Brush tool in After Effects to draw out several different sets of eyes. Creating the eyes and arms all within After Effects made it easier for rigging and any necessary modifications needed later in the process.

Animation Rigging
The client wanted the arms on the boxes to convey excitement, as if the boxes were riding a roller coaster. For this reason I needed easy and precise control over the arm movement. I recalled seeing an expression setup online that allows for simple Inverse Kinematics(IK) rigging in After Effects. After some digging I came across Dan Ebberts website with the working code and was able to get this arm IK rig set up easily. 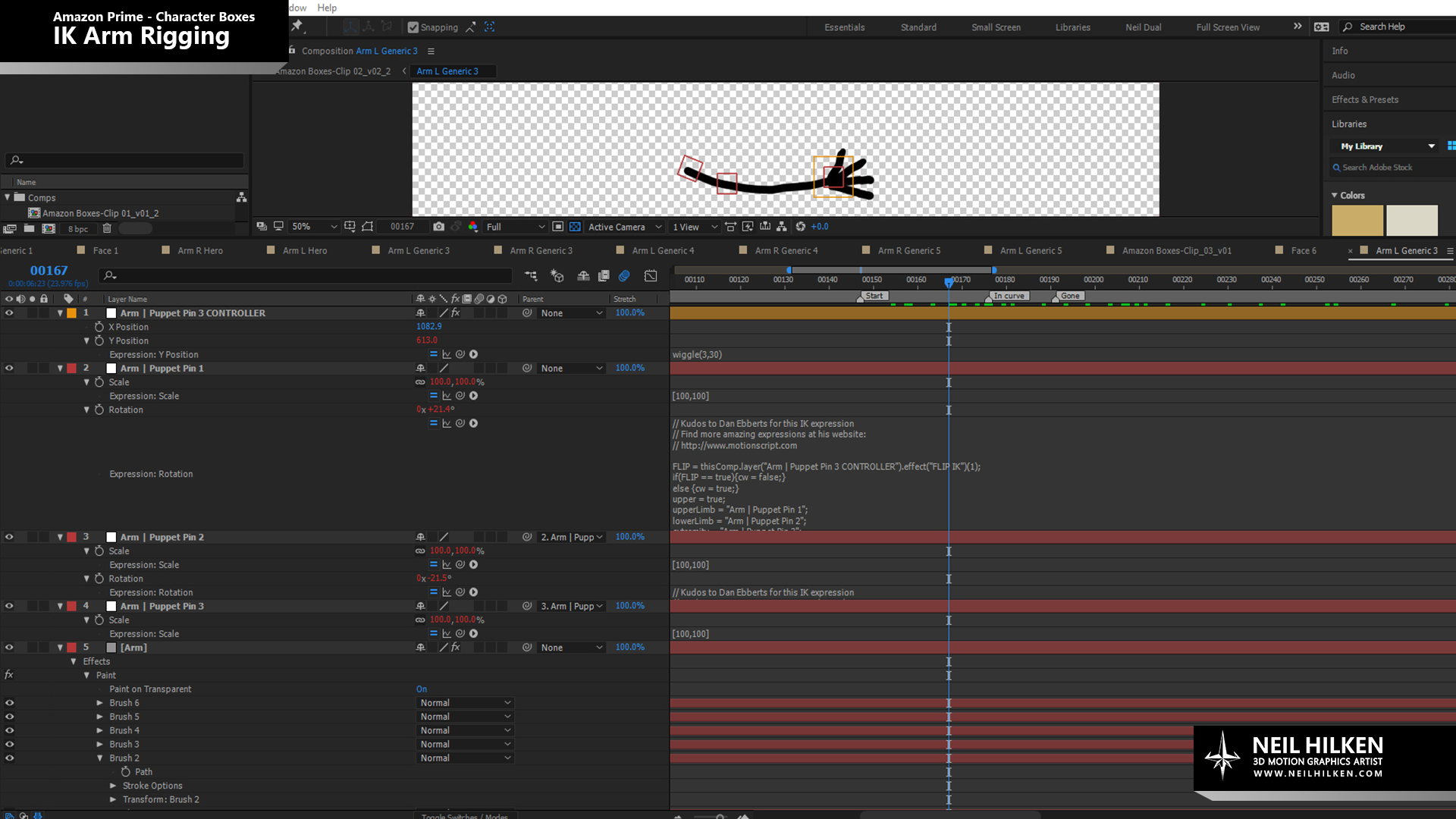 3D Tracking
There were multiple different options for getting the faces to "stick" to the surface of the boxes. I thought about going the frame-by-frame route and hand drawing/keyframing the faces to match the position of the boxes manually. The issue with this method is that once the faces are positioned, they are pretty much locked in and any adjustments to the look would require a complete re-do of the face alignment process. There are tricks to adjust multiple keyframes at the same time, but with somewhere around 30 moving boxes to track faces and arms onto, I decided to save myself the headache and do this all in 3D space.
The 3D route entailed bringing the individual footage clips into Cinema 4D, where I used the camera tracking and camera calibration tools to create a 3D solve for the scene. Once I had a digital 3D environment of each shot created, it was just a matter of building out rough geometry of each box and keyframing it to move along the route of the conveyor belt.
Having a 3D scene with moving box geometry provided me with not only null position data for each box that I could bring into After Effects, but also with object buffers of each box that I could later use as luma mattes to occlude the faces when they went behind other boxes.

Compositing
With the 3D data exported out of Cinema 4D as an .aec file for After Effects, I set up a new After Effects composition for each shot and placed the respective 3D camera and 3D nulls into them.
Since there were so many instances of boxes and I didn't want to have to manually link up each character face precomp to its respective null, I used some simple expressions to have the precomp's position be dependent on its layer order relative to the 3D null.
To account for the occlusion caused by the movement of boxes in front of each other, I used the object buffers I rendered out of Cinema 4D as a luma matte for the face precomps. Since the mattes were a rough estimate of the box shapes and location, I had to go in an mask some areas of the faces out manually. This was still much easier than masking every single face individually. 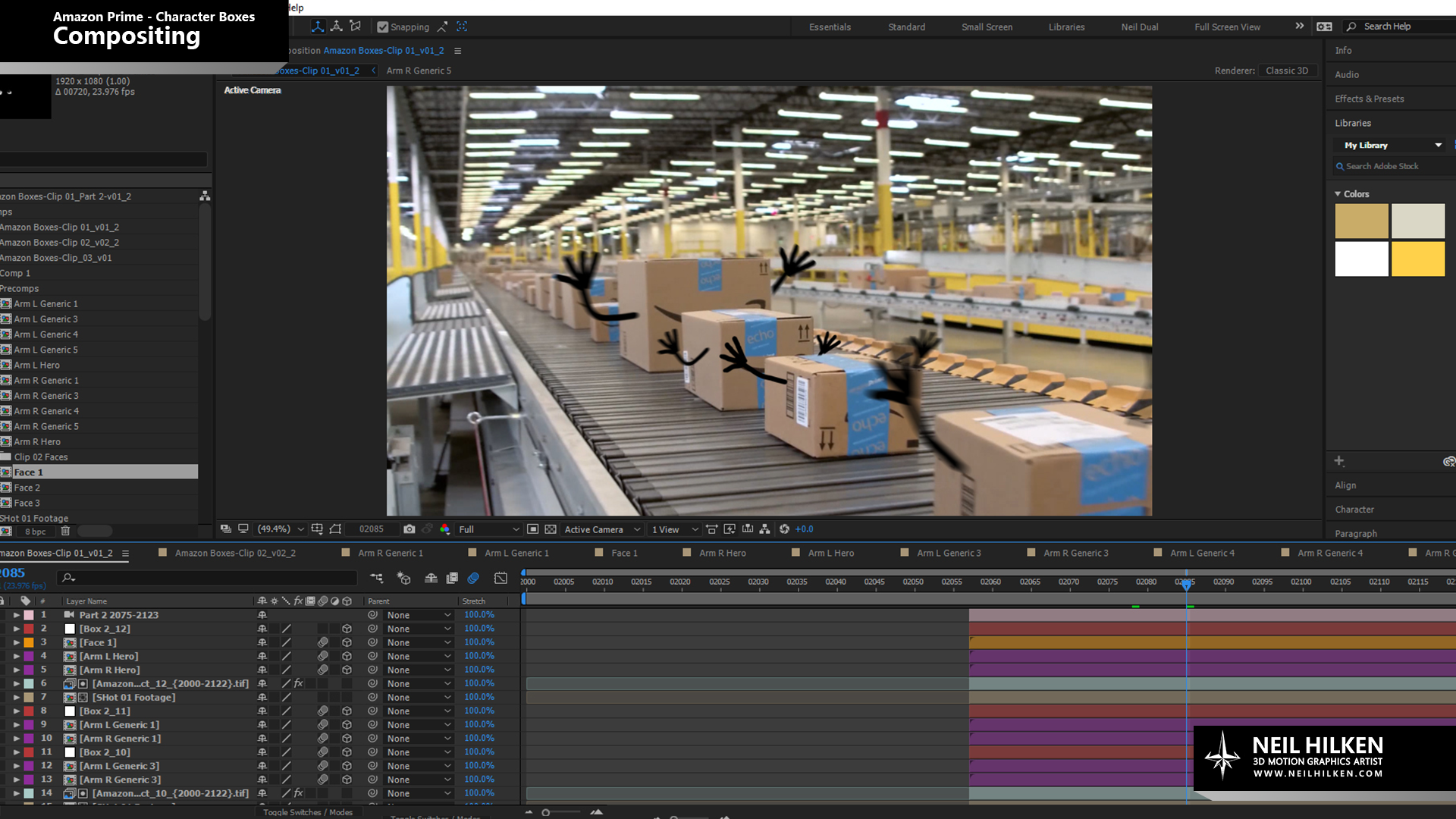 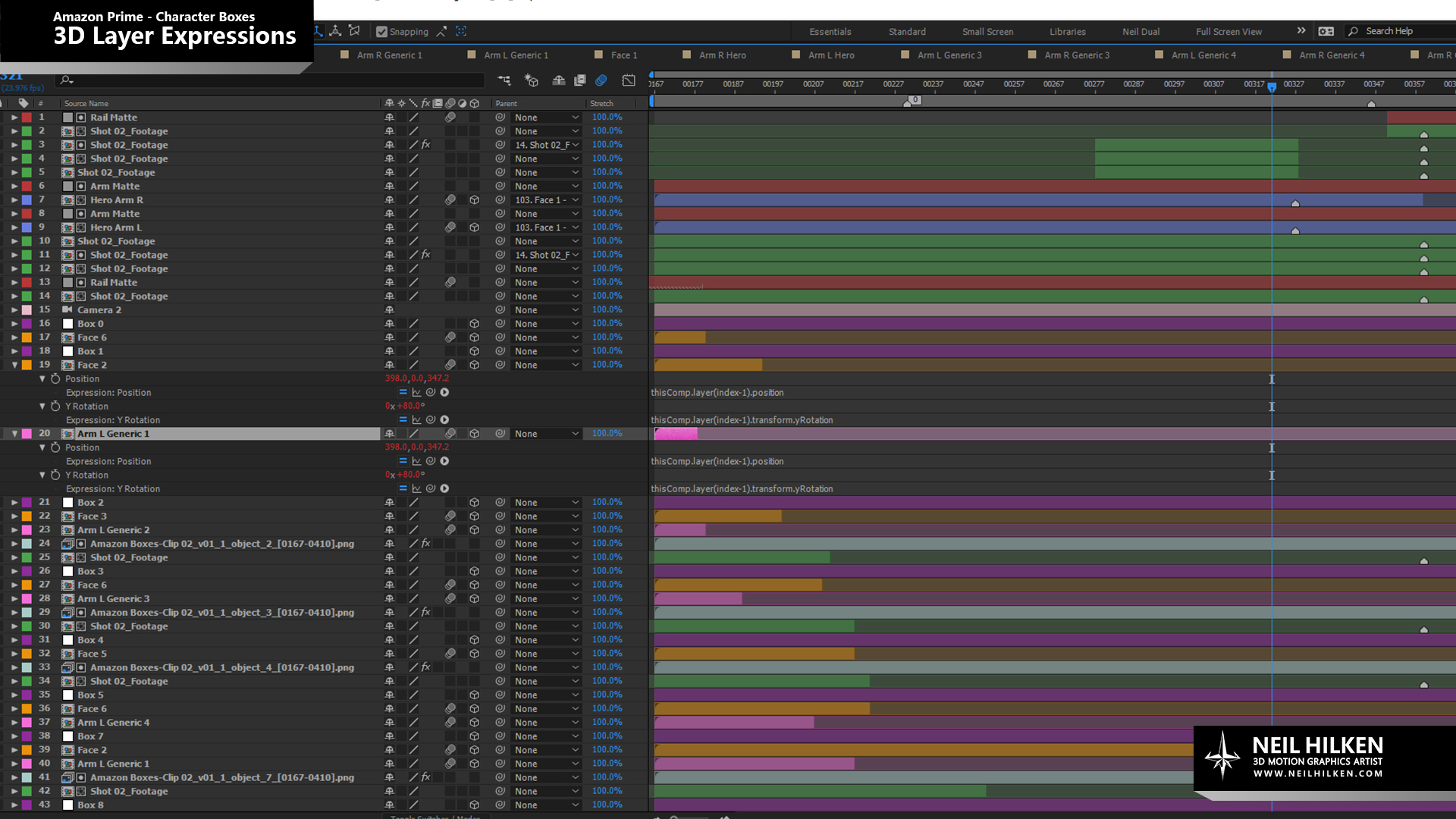 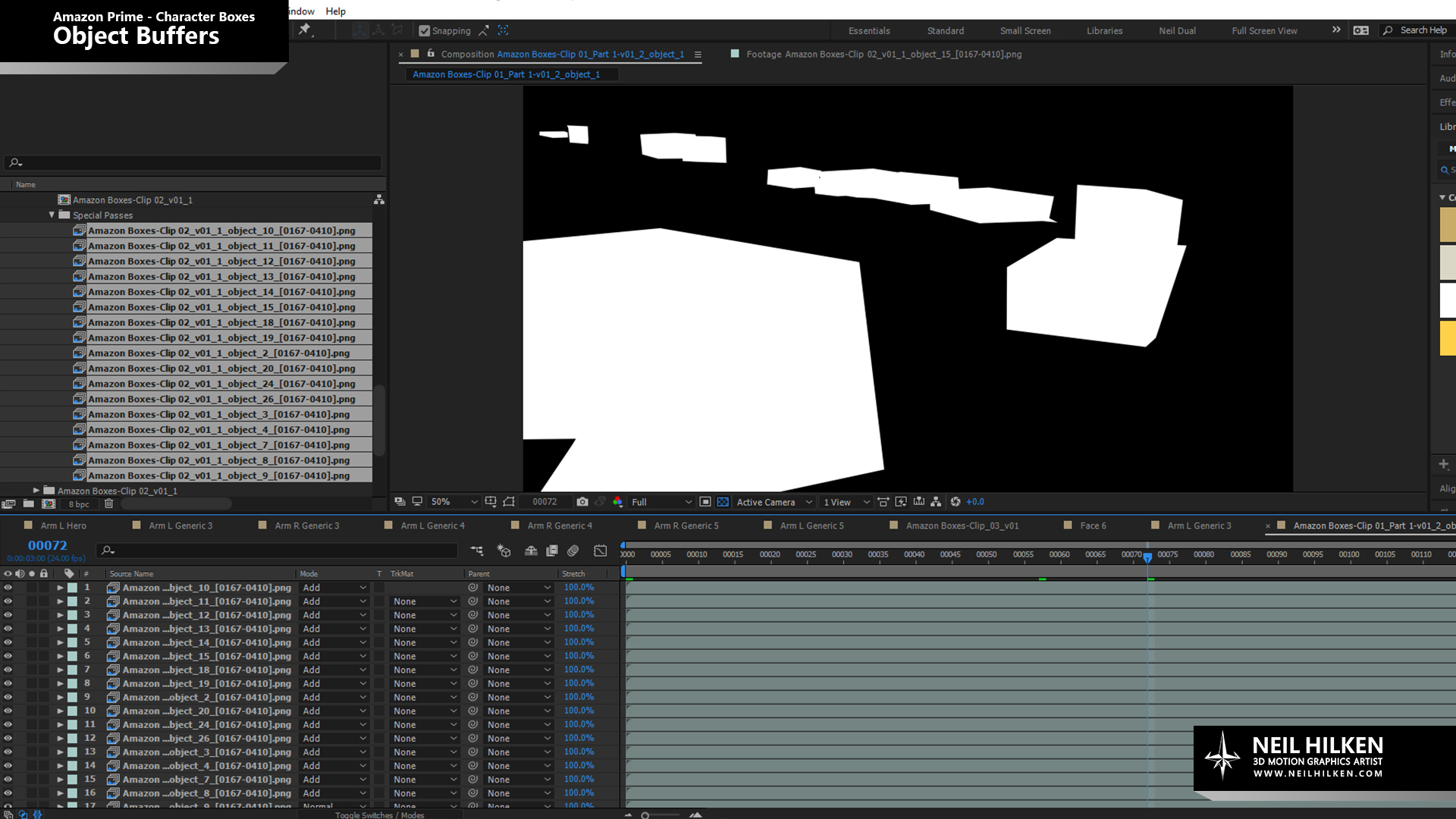 Thank you to all those who helped make this a successful project!
Like What You See? Click Here To Collab With Neil

Participant - Logo Animation
↑Back to Top